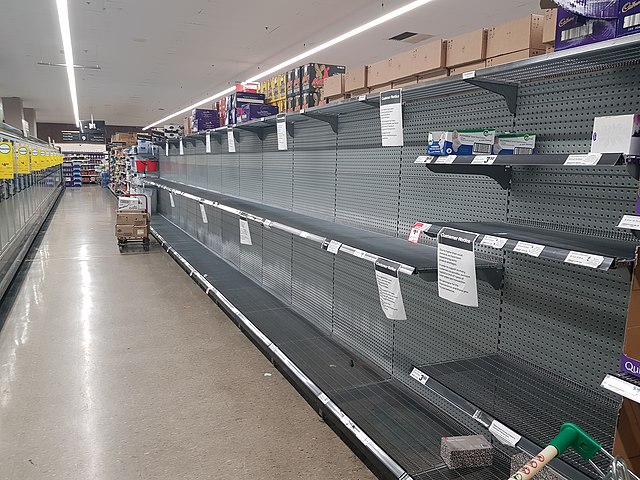 The global supply shortage is a huge problem in the US. Bottlenecks along the supply chain are causing major disruptions, driving up prices, and leading to a shortage in goods.
Lingering effects from COVID-19 and a shortage in truck drivers and warehouse workers are all contributing factors. This all spews from a boom in demand that global supply and trade simply can not keep up with.
“The beginning of the shortage started within the ports with a decrease in workers in that system. The ports were unable to unload ships, then the second piece of it is the removal of storage containers from the ships by truckers, and there is a massive decrease in the people doing that,” said Mrs. Miller.
The US Labor Department reported that the warehouse industry had a record high of 490,000 job openings and 80,000 openings for truck drivers. There are not enough people to get goods off of ships and there are not enough drivers to move goods across the country.
“It’s multifaceted, so what’s happening is there’s not enough cargo containers being moved off of ports so if you don’t have a place to put cargo you can’t unload ships. So ships are just sitting out at sea right now waiting to get into these ports. Something like 96 ships are sitting outside of the three major ports outside of L.A,” said Mrs. Miller
There is also another piece to this problem: a surge in demand.
“People did massive ordering over the pandemic, businesses did massive ordering too, so really the total amount of consumer goods just blew up. There’s shortages in some instances but now there’s just been so much over-ordering,” said Mrs. Miller.
This is all a big supply and demand issue, the want for goods is booming, while supply and labor are at a low. This creates a massive imbalance that clogs the supply chain.
This issue is having a huge impact on the retail industry. Stores are running out of goods and shoppers are having to pay more.
“There’s less stock and I’ve noticed when we’re out of things we’re out for a lot longer. It’s harder to get stuff back on the shelves and replenish it. People are also buying less and they’re certainly paying more,” said junior Jared Ober who works at Ace Hardware.
These problems are reaching students at Marriotts Ridge as well. The increase in prices is a problem that is certainly being felt.
“Everything is too expensive and now I’m broke,” said sophomore Rose Aquila.
“I see it when I get gas, also at the grocery store,” said junior Mahmoud Babkir.
One of the students’ main worries is how the shortage is going to affect them moving into Black Friday, Christmas, and the rest of the holiday season.
“I think that there will be a lot less shopping happening because there will be fewer supplies, fewer TVs, and fewer Xboxes,” said sophomore Ben Kylap.
Because of this people are having to order Christmas presents months beforehand.
“My parents want my Christmas list by the beginning of December,” said sophomore Jasmin Kirkland, “Some of my stuff is going to be delivered in January, even though I ordered it last month.”
As Kirkland referenced, online retailers are being hit hard and cannot make deliveries on time. Students are getting orders months late and the holiday season is certainly at risk.
Worldwide governments are trying to solve this issue, but it’s going to be a long time before we see results. In early October, the Biden administration set a plan to run the ports of Los Angeles and Long beach 24/7 to help ease up shipping clogs. Many more efforts are being implemented in the US, but the issue will linger for a while longer.
“Probably by the beginning of second quarter of next year, which is like April, May, June-ish is probably about when we will be seeing easing on the supply chain side of things,” said aaa Mrs. Miller referring to the physical year and not school year.
Even with the difficulties in the supply chain students can barely wait for this holiday season.
“I’m excited for Christmas and getting presents from all of my friends,” said Kirkland.
It’s sure to be a great holiday season, even if the prices are a little high, just make sure to get your orders in as early as possible.